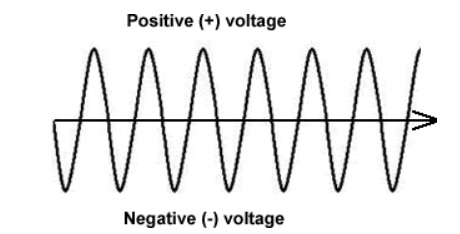 A typical scenario would be to increase the power to 500,000 volts to distribute it over a long distance. This high voltage has a low current to reduce the I ^ 2R losses in the wire. A large transformer substation reduces power to 2200 volts, and a small transformer on a typical power pole reduces it to 220 volts, the voltage required for a home. AC is suitable for this phenomenon because it is an alternating waveform that is positive for half its cycle and negative for the rest of the cycle.

This positive and negative waveform creates magnetic fields in the transformers that allow a small coil to transfer its energy to a larger coil, thereby increasing the voltage. Alternating current is created by simply passing a wire through a magnetic field with a special device that calls a stator at the end of the wires to keep the rotation in the right order for power generation.

Why AC supply is used in homes?

Because high voltages are more efficient for sending electricity over long distances, AC has an advantage over DC. This is because the high voltages from the power plant for home use can be easily reduced to a safer voltage. The voltage is changed with a transformer.

Difference between AC and DC Electrons have negative (-) electrical charges. As opposite charges are attracted, they move towards an area consisting of positive (+) charges. This movement is facilitated in an electrical conductor, such as a metal wire.

Electrons move directly with direct current If you connect a cable from the negative pole (-) of a battery to the positive pole (+) with direct current, the negatively charged electrons fall through the cable to the positively charged side. The same thing happens with a DC generator where the movement of a wound wire through a magnetic field forces electrons out of one terminal and attracts electrons to the other terminal.

With alternating current, the directions of the electrons change For an alternator, a slightly different configuration changes the pressing and pulling of the individual generator terminals. Thus, the electricity in the wire moves in one direction for a short time and then reverses direction when the generator anchor is in a different position.