NMOS is constructed with the n-type source and drain and a p-type substrate, while PMOS is constructed with the p-type source and drain and an n-type substrate. In an NMOS, carriers are electrons, while in a PMOS carrier are holes. Where CMOS is the combination of NMOS and PMOS. CMOS technology uses less energy to operate at the same output and produces less noise during operation.

NMOS (nMOSFET) is a kind of MOSFET. An NMOS transistor consists of n-type source and drain and a p-type substrate. When a voltage is applied to the gate, holes in the body (p-type substrate) are driven away from the gate. This allows the formation of an n-type channel between the source and the drain, and a current is conducted from electrons from the source to the drain through an induced n-type channel.

Logic gates and other digital devices implemented using NMOSs are said to have NMOS logic. There are three operating modes in a NMOS called cut-off, triode and saturation. NMOS logic is easy to design and manufacture. Circuits with NMOS logic gates, however, consume static power when the circuit is idle, since DC current flows through the logic gate when the output is low.

The CMOS technology is also used for various analog circuits such as image sensors (CMOS sensor), data converters and highly integrated transceivers for many types of communication. 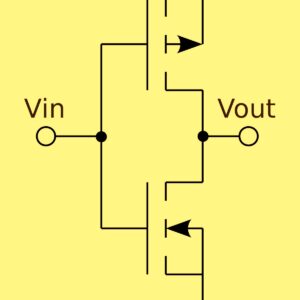 The difference between NMOS, PMOS and CMOS transistors

Why do we use CMOS instead of PMOS and NMOS?

An advantage of CMOS over NMOS logic is that both low-high and high-low output transitions are fast since the on-state (PMOS) pull-up transistors are in contrast to the load resistors in NMOS logic have a low resistance. In addition, the output signal oscillates the full voltage between low and high rail.