we use diodes in series

The basic purpose of diode is limiting direction of current.

As we all know the current flow will be from + ve terminal to the -ve terminal. but during the ac current case, the polarity will vary continuously and if you have a circuit that needs a current to flow in a certain direction then you can use a diode to do the job.

The most common function of a diode is to allow the electric current to pass in one direction (called the forward direction of the diode), while blocking it on the reverse (vice versa). thus, the diode can be seen as an electronic version of the valve. this unidirectional behavior is called rectification, and is used to convert alternating current (AC) into direct current (dc). shape rectifier, the diode can be used for tasks such as extracting modulation from radio signals in the radio receiver. 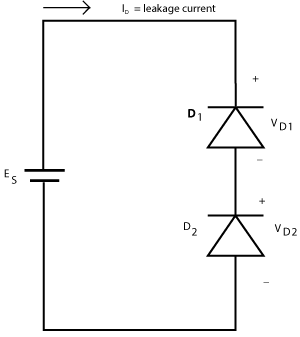 However, the diode can have more complicated behavior than this simple on-off action, due to its nonlinear current voltage characteristics. the semiconductor diode begins to conduct electricity only if a certain threshold voltage or cut-in voltage is present in the forward direction (the state at which the diode is said to bias forward). the voltage drop across the forward biased diode varies only slightly with the current, and is a function of temperature, this effect can be used as a temperature sensor or as a voltage reference.The basic purpose of diode is limiting direction of current.

So in our circuit you can operate it in any bias condition based on our needs. For example if you just want a positive cycle then it will be set forward bias, for negative cycle it will be set to reverse bias.

It can also be used as a peak detector that detects the max voltage value.

Diode rectifier app Apart from normal dc supplies, they can be used as current sources, as indirect voltage measurements, for reading line frequencies, for frequency doubling  non sinusoidal waveform such…

What is Zener Diode. Zener diode is a special type of diode whose reverse bias voltage discharge is an interesting characteristic. a steeply penetrating voltage with a current thereby making…

As we all know, generally the diodes are two terminals of uni-directional semiconductor devices. The diode is just an electronic switch! depending on the voltage difference between the terminals we…