A transistor is a semiconductor device used to amplify or switch electronic signals and electricity. It is made of semiconductor material, usually with at least three terminals for connection to an external circuit. A voltage or current applied to a pair of terminals of the transistor controls the current through another pair of terminals. Since the controlled power (output) can be greater than the control power (input), a transistor can amplify a signal. Today, some transistors are individually packaged but many others are embedded in integrated circuits. 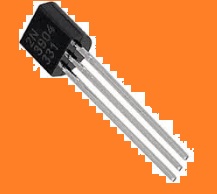 Transistor as a switch

Transistors are commonly used in digital circuits as electronic switches that may be in the “on” or “off” state, for both high power applications and switched power supplies and for low power applications such as logic gates. The important parameters for this application include the switched current, the controlled voltage and the switching speed, which is characterized by the rise and fall times.

Transistor as an amplifier

Amplifier circuit, configuration of common emitter with a polarization circuit of the voltage divider.

The common emitter amplifier is designed so that a small voltage change (V in) changes the small current through the base of the transistor; The current amplification of the transistor combined with the properties of the circuit means that small oscillations in V produce large changes in V out.

The transistor is mainly used for:

A low base voltage (0.7) is sufficient to start the circuit. It has a fast switching speed compared to the relay, because the relay is an electromechanical switch.

In analog circuits (transistor operating in active region) these are mainly used as (or as part of) an amplifier. They can also be used to transfer the impedance, such as buffer, voltage regulator, constant current source, etc. Some special types are used for various purposes, such as a transducer.

In digital circuits (transistors operating in saturation or separation region) they are used to switch applications.

During this charging process, a charging current (i) will flow to the capacitor opposite any voltage change at a rate equal to the charge rate of the electrical charge on…

Batteries and condensers seem similar because they store and release electricity. However, there are key differences between them that affect their potential applications due to how they work differently. A…